Over the last few weeks I have managed to carve out some time in the studio. Its a personal goal to try and incorporate that into my weekly routine (such as it is). These past few weeks saw me start and finish 2 more robots. In this case I think the productivity had more to do with building 2 more of types I had already done, which is way easier (no endless hours staring at something trying to figure out how it goes together) rather than me focusing on working. Either way though being productive makes me want to be more productive, which is good because that's what I want to focus on. 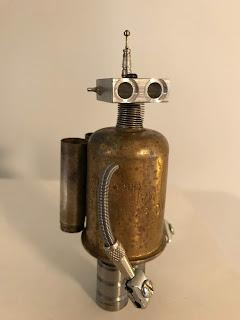 This one looks like the one I gave my friend Lisa last month, it uses some of the stuff she gave me. 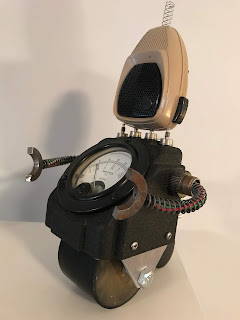 This one is the fourth of this type I have done. Being wheeled its a little different from what I usually do, its also somewhat smaller since it has no legs.
Posted by Bill Hecht at 3:14 PM